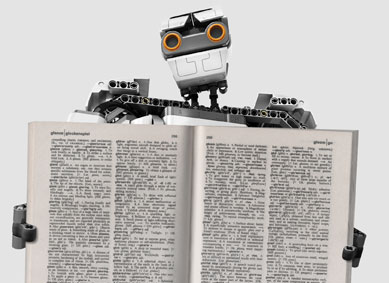 Oi! Metalhead! Maybe your translations wouldn't be so pants if you turned the book around.

What could the translation software of the future look like? I’ve just read a fascinating article by Jost Zetzsche – who, if you haven’t heard of him, is a working translator who also writes and blogs in guru-like fashion about linguistic issues. I’d usually give you a link to the article itself, but as it’s not available on the Web – Jost was writing in the latest edition of the ITI’s resolutely offline Bulletin magazine – you’ll have to make do with my summary below.

In a nutshell, Jost’s point was that machine translation (MT) in its current form generally produces text which is of little use to a professional translator. All translation is a compromise; a distillation down to one choice out of many possibilities the (human or machine) translator has considered along the way. Although even skilled human translators have to live with these compromises, their years of specialist training and contextual knowledge mean they make pretty good choices to start with. However, unlike a human translator, an MT system has no real idea of context – sometimes it strikes it lucky with a readable translation that accurately reflects the source text, but all too often it retains rubbish and throws out potential jewels along the way. Why? Because it can’t make informed choices itself, and it assumes its typical audience won’t be able or willing to make said informed choices either. See, the typical consumer of MT is the linguistic layman who may realise that he/she is being offered a sucky translation (probably because it doesn’t make any sense), but doesn’t have the training/skill to be able to tell what’s wrong, or correct the machine’s output – and would be quickly baffled if offered a range of options.

This is one reason why professional translators are exasperated by MT. The text it serves up is often not just wrong; it’s also frequently very difficult to convert into something right, partly because of an MT system’s habit of covering its traces as it goes. However, there’s a very high chance that the makings of a high-quality translation are hiding somewhere in the dustbin of scraps the system cheerfully rejected on the way to making its final choice.

What if someone produced an MT system which allowed a skilled translator to pick through the contents of that dustbin and construct something closer to the mark? Computers may not be great at linguistic judgement calls, but they’re very good at identifying whole lists of possibilities – a thesaurus in real time, if you like. The translation process could be so different if human translators had the ability to direct the choices being made by the MT engine. And – taking things a step further – what if the software then remembered these inputs by the translator, and used them to improve the translations it offered next?

Jost has laid down the gauntlet. Is any developer out there ready to pick it up?

Suis-je Charlie? Well, yes and no «