Why you should keep your language lessons at regular intervals

In language training, in teaching, and, indeed, in life we talk about “a steep learning curve” – it’s one of the most pleasing things one can achieve: undertaking and mastering a challenge to a level, and in a time, that one would have previously thought impossible. Just look at the satisfaction on the faces of the contestants on Strictly. The originator of the term was German psychologist and philosopher Hermann Ebbinghaus (1850-1909), a man whose research informs language teaching even today.

Let’s look at the way in which you forget learned phenomena, and how you can halt, and indeed reverse, this trend in your language learning. Firstly: let’s remind ourselves of the various theories which lay behind why one forgets:

So, how can we avoid losing our hard-won language?

To return to Ebbinghaus, the concept of his that is most used in language-learning is that of Spaced Repetition. This articulates the idea of the time required from learning an item to its being forgotten, and hence the optimum time for the learning to be reinforced for it to become more fixed (though I cannot say permanently as Ebbinghaus had strong views on the contingency of all learning).  Being a scientist, he expressed it thus: 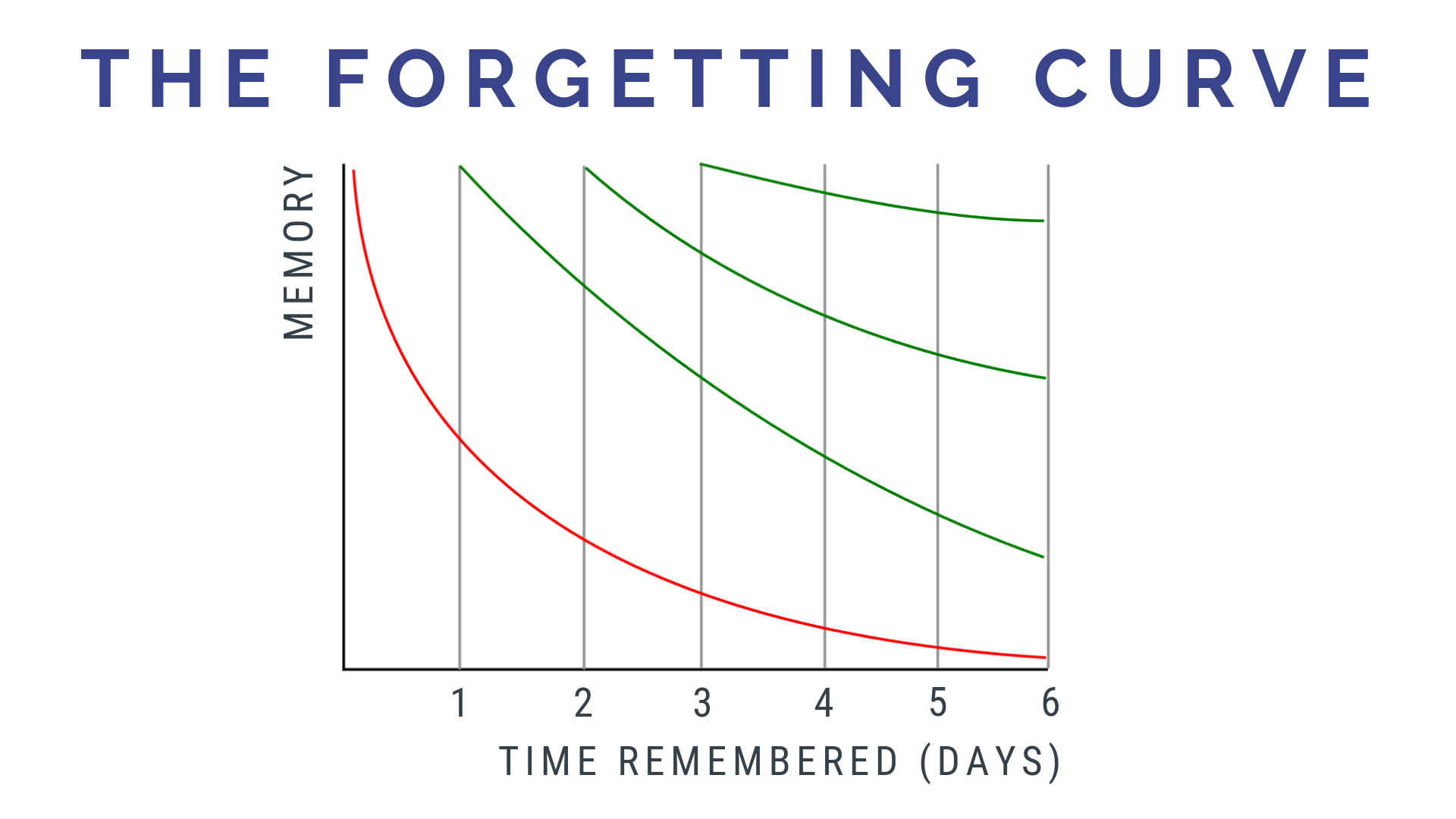 This is a typical model, there are many others.  They all explain the same thing, which is the gradual loss of the grasp on an item over time.  Surprise, surprise.

However, note the numbers 1-5 on the horizontal axis.  These represent times when the language item has been revised or revisited in some way.  Each time it is returned to the forefront of memory – and the subsequent forgetting curve becomes a little less steep.

What has this to do with language-learning?  Wonder why I push for two lessons a week, not just one?  Because the structure of your language-learning can have a huge effect on the way you improve.  Something all our language learners have in common is that they are all busy, they have other concerns apart from their lessons.  So, by keeping the lessons at frequent intervals we manage to overcome the forgetting curve by revising and recycling the language.  Many of you will, I hope, be using our lexis sheets. Or if you are using apps such as Quizlet your trainer will be sending you flashcards to practice and return the item to the forefront of your consciousness between the lessons.

We don’t have to worry too much about the exact spacing of the lessons, the reason being that the principle researcher into the actual timings was practising entirely on himself, and his idea of a ‘big’ Friday night was memorising and repeating 2,300 abstract syllables, only to find he performed better on a Wednesday morning.

So, rather than following him down the path of exact timings and a knee-length beard, we can all work out for ourselves what works best for us.  The wonderful advent of the app allows us to keep returning to linguistic items until they become part of our lexis, and the attentions of a practised trainer elevate them further to part of our spontaneous working output.

So, little and often has become a cliché, but a vital one for developing your linguistic abilities.  Enjoy the journey!

Business Etiquette Abroad: A Guide to Italy «
Five top tips for achieving your language-learning resolutions in 2019 »