German has become the must-learn language for British millennials

To the dismay of teachers up and down the UK, the number of A-level students taking German has halved over the past ten years and figures for French have halved in the past 14 years.

But they’re not the only ones to voice concern at the fact that 11 to 18-year-olds are becoming increasingly disinterested in European languages.

Julia Gross, the chargé d’affaires at the German embassy in London, said: “This year’s further decline in the number of A-level students studying modern European languages, and German in particular, is both saddening and troubling.” Despite the pessimistic tones of some, however, others still continue to discover reasons to be cheerful.

While at this year’s World of Learning conference in Birmingham, our team learned about some of the most inspiring developments in the world of language training. Most promising of all, perhaps, was the number of millennial professionals at the conference.

Consistent with our observations at the World of Learning, recent headlines would suggest that, among ambitious millennials, European languages are as important and as attractive as ever—especially German.

During the summer, London-based Goethe-Institut announced that more than three thousand young adults aged between 18 and 30 had signed up for their German language courses.

Angela Kaya, director of the institution, said: “We are seeing an increase of British students who might think they haven’t learned German as a foreign language so far and it makes sense to do it now, as a young professional.”

But how does the country where the language originates compare in terms of popularity among global expats?

According to InterNations, a global expat network, Germany ranks among the bottom three nations ‘for ease of settling in’. Though 72% of people who’ve settled there say they are generally happy, 62% of those who reflect poorly on their happiness claim that not having enough opportunities to socialise has impacted them negatively.

What’s more, an estimated 56% of respondents find it challenging to make friends, and only 51% claim that the local population is generally friendly. That’s 18% below the global average. 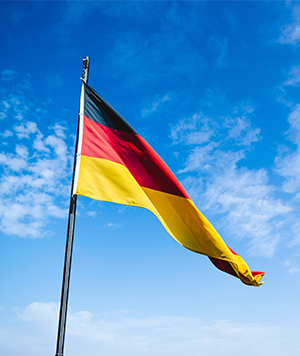 The biggest hurdle facing many expats once they land on German soil, however, is the language divide. An estimated 59% of expats claim that it’s largely difficult to live in Germany without knowing the tongue: a disheartening statistic when you consider that only 19% of expats agree that German was easy to learn.

According to InterNations, the language barrier contributes massively to the unhappiness of expats, with 50% claiming it affects their happiness negatively. “Not knowing [the language] creates a feeling of isolation,” one InterNations expat explains. But the list of charges against Germany doesn’t end there.

In 2017, only 42% of respondents said they were happy with the country’s climate.

It should be said, however, that Germany’s stable economy and healthy job market more than compensates for the rainfall as well as the linguistic pitfalls. Around two-thirds of expats state they considered the economy and job market a potential advantage even before moving: that’s 20% points above the global average.

At the time of writing, the largest proportion of expats in Germany worked in manufacturing and engineering (12%) and IT (20%).

German as a language of the future

At first, many of the expats who genuinely struggle to master German complain that the language is exclusive: full of harsh-sounding consonants and cumbersome polysyllables. However, as their confidence grows, and they become increasingly comfortable in conversation, their original reservations tend to dissipate.

Others, however, fall in love with the language at first syllable. Spy fiction behemoth, John Le Carré, for example, wrote in Guardian earlier this year: “I learned to imitate, then recite them, crack and all. And I discovered that the language fitted me. It fitted my tongue.

Though the debate surrounding the subject will no doubt rumble on, one fact about Germany remains undisputed: you’ll be hard pressed to find a more idyllic place on the continent for young and ambitious professionals.

Our advice to those who plan on ditching their native home for Deutschland? Simple: lerne die Sprache.